The fighters stopped to protect the OSCE mission in Gorlovka 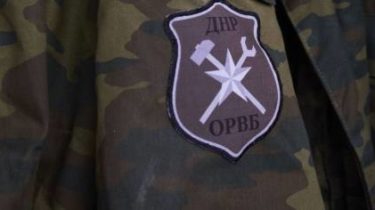 Representatives of ORDO from 24 September to unilaterally stopped to protect front line patrol base of SMM OSCE in the settlement Gorlovka.

Representatives of the ORDO WITHOUT WARNING ON ITS TERRITORY STOPPED the SECURITY of OBSERVERS of the OSCE SMM, the Ukrainian side of the JCCC in…

Posted by the Press center of the ATO headquarters on Tuesday, September 26, 2017

The Ukrainian side of the JCCC qualifies such a move as a gross violation of the Minsk agreements.

“These actions are outright provocative and constitute a gross violation of the Mandate of the OSCE SMM. Together with the recent incidents of restriction of freedom of movement of the Mission and its UAV attacks on the uncontrolled Ukrainian Government territory – the links of one chain aimed at intimidating representatives of the Mission and hinder their effective work on the territory of the ORDO and ORLO”, – noted in SCCC and urged Russia to take urgent steps to promote the OSCE’s special monitoring mission in the occupied Donbas.

Informed observers of the OSCE mission recorded close to the occupied Lugansk camp with firing positions, bunkers and trenches that have been recently landscaped or built near the village of Long.