The guy, a few hours of tension all Kiev, on their own tears from the bridge of lovers 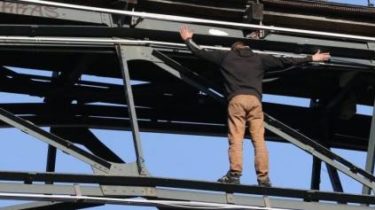 The person who was going to jump off the bridge of lovers in the center of Kiev, decided not to commit suicide.

The correspondent reports about it TCH with the scene.

“I worked as a sous chef… I am 20 years old… From the Zhytomyr region Today… with a friend worked on the dismantling, and was already past the brink. Already today I was on the verge of collapse,” – said the would-be suicide, who called himself Victor.

Also the man admitted that the suicide he was saved by a security guard, cafe, Sergei, who talked with him more than two hours, until he was standing on the edge of the bridge.

“Today I almost did something stupid,” said Victor.

At the same time, a man accused the police that they ruined his life.

“I want to punish those who deserve it – the Zhitomir region, Romanovsky Department, the entire Department, except for some people. I was set up under article 121, part 2 (Intentional serious bodily injury – approx.ed.)… I think it’s good for three days in the police station, not even in the “monkey”, and in the office sitting sleep. When my mother anyway because she’s drinking… I Think it is nice that all? Life is getting boring… You are in the Department was not, clubs did not get to twist the bulb is not forced… Moral pressure that don’t know,” he said.

In addition, the man refused medical help, but doctors managed to convince him to go to a car emergency.

We will remind, in August in the morning in the capital, an unknown man in civilian clothes threatened to jump from the third floor of the hotel “Khreshchatyk”. The man was on the grid tense on the third floor of the building. According to witnesses, the man demanded the Consul General of the Russian Federation is the Russian and on the grid came through the balcony of the hotel. After several hours, he decided not to jump and came back into the room.