“Where are those roads on Mars?”: Savchenko said that was injured due to potholes on track 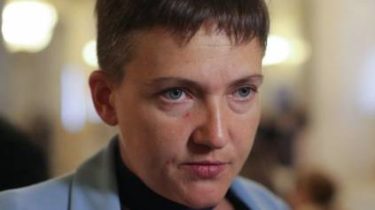 The people’s Deputy Hope Savchenko said that, together with his assistant received injuries due to the large pit in the middle of the highway N 14 between Kirovohrad and Mykolayiv.

According to the parliamentarian, the way she was driving in a terrible state and it is simply impossible to go.

“Today, in 5 hours. in the morning, my sister Savchenko Faith and assistant Deputy Protoscience, Tatiana, leaving the route N 14, moved in the middle of the road in pit depth to the hood of the car. My assistant got a shock from a head injury with deep Rossony, I – bruise of a thorax and cervical vertebrae. It did not help the seat belts” – she wrote on the social network Facebook, adding a photo of a broken road.

“In many men, nothing but an animal, do not see”: Savchenko explained why she was lonely

In the post Savchenko appealed to the Prime Minister of Ukraine Vladimir Groisman and asked where in Ukraine to renovate the road.

“Where is the road that you are redoing that show on TV?! On Mars?! And throughout Ukraine when will roads be repaired?! Especially those that are the arteries of economy of Ukraine and fail regularly and often?”, – she wrote.

We will remind, people’s Deputy Nadezhda Savchenko spoke about his unusual way of earnings – at the age of 21 policies worked in phone sex. Savchenko claims that were able to get through “appropriate attitude”.