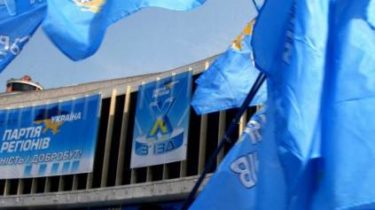 The General Prosecutor of Ukraine reported about suspicion to the former MP and assistant to the Deputy from Party of regions, which has been implicated in “black accounting” of this political force.

This is stated in the message of the GPU Thursday, September 28.

The office noted that it has collected enough evidence of the involvement of these individuals in “activities as part of the criminal organization under the leadership of former President of Ukraine Viktor Yanukovych”.

According to investigators, the suspects were given, and given in cash in foreign currency, doing their own illicit enrichment, and also gave bribes to officials and other government officials.

During the searches at the place of registration and residence of the defendants and other persons that may be involved in the “black accounting” regionals, discovered and seized valuables, computer equipment and documents. The information obtained can be used as proof of the facts and circumstances established during the said criminal proceedings.

SAP and NAB allegedly want to get rid of the case “black accounting”, but the GPU will bury him – Trepak

Pre-trial investigation to establish other organizers and executors of these crimes continues.

We will remind that the people’s Deputy Serhiy Leshchenko published part of “black accounting” ETC. Upon review of these documents, the Deputy reported that during the first half of 2012 the Party of regions spent about $ 66 million In particular, in documents found confirmation of financing of the Maidan.

But the most sensational discovery was the presence in the Ledger of the regions Paul Manafort, the former campaign Manager of the candidate in presidents of the United States Donald trump. After the scandal trump dismissed the consultant from the leadership of his staff. Later he resigned.

Have videooborudovaniya documents “black accounting” of the Party of Regions