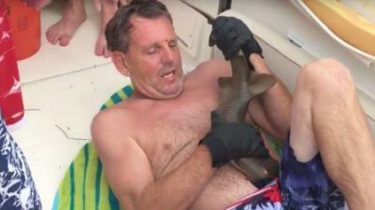 Florida resident Ervin McCarthy caught more than he bargained for on a recent fishing trip. A man came out of the water with a small shark, which was stuck in his stomach.

Reported by the news.com.au.

On the Australian beach, a man right behind the tail tried to drag the shark back into the ocean

Although she was small in size, but were able to harm the man in the video, hear McCarthy swears from the pain. The shark was moving and not razikale jaw, increasing the size of the wound and causing him further suffering.

To pull the shark from the body of a man could not, because friends told him to lie down on the deck, and one of them pulled out a knife. They decided to cut the shark and let her blood until she let go of the unfortunate.

“Clamp it, pierce the shark” – the woman shouted.

“Don’t cut me, don’t let her blood on me,” McCarthy shouted in response. A woman called to cut the animal’s brain.

Shark for a moment, unclenched his jaw, but only to dig into another part of the abdomen.

In the end, “poor” declined from his grasp. Friends washed McCarthy from the blood to explore the damage caused to the lower part of his belly. Only a small sign of the bite.

ATTENTION! IN THE VIDEO THERE ARE SHOTS OF BLOOD.

We will remind, in Australia unknown sea creature turned feet boys in a bloody mess. The guy had to go to the hospital to stop the bleeding.