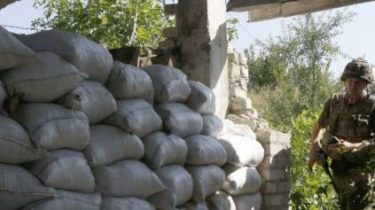 Over the past day the terrorists in the Donbass 16 times broke the truce. Two servicemen of the ATO forces were injured.

The militants did not stop shelling Ukrainian positions at the seaside and Donetsk areas. After 18 hours and nearly to midnight constantly fired rocket-propelled grenades, heavy machine guns and small arms strengthening under the Avdeevka. Over an hour beat on the defenders of the mine Butovka.

#Topod the Construction of the press center of staff ATO in 28.09.2017. At the end of the last days the situation in the ATO area …

Posted by the Press center of staff ATO on Thursday, September 28, 2017

The greatest number of fire provocations during the last day recorded in the coastal areas. Tonight terrorists again from mortars caliber 82 millimeters bombarded fortifications near Marinka. And about 20 hours as a result of fire fighting with the use of anti-tank grenade launchers and heavy machine guns received shrapnel wounds, two Ukrainian soldiers. In addition, at the end of the day under attacks of fighters were strongholds near Water and twice near Pavlopol.

Earlier it was reported that militants fired on September 28 the houses of the residents of Marinka.