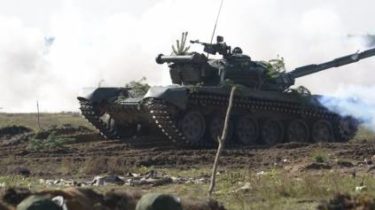 Russia has left some of its troops on the territory of Belarus after the completion of military exercises “West-2017”, despite the promises Moscow not to do so.

About it in interview Reuters was declared by the chief of the General staff of the Armed forces of Ukraine Viktor Muzhenko.

According to him, Russia withdrew some of its troops from the neighboring country have lied about how much the Russian military actually participated in the exercises.

“We have information that they brought only a few units from the announced 12 500 soldiers, of which 3,000 were Russian, but there was much more,” – said Muzhenko.

The chief of staff added that the Russians withdraw their air forces from Belarus to show visibility check-out.

“Russia has demonstrated, and it was primarily a demonstration, return air units – they withdrew from the airfields and flew to the airfields of Russia. But we understand that aviation 300-400 km is the distance that can be overcome within a very short time,” he said.

Military exercises of Russia to Belarus: what is double-game the Kremlin and what to prepare for the world

Reuters notes that the Ministry of defence of Belarus said that the last train with Russian military equipment and supplies left the country on Thursday, September 28. The Russian defense Ministry has not responded to an immediate request for comment.