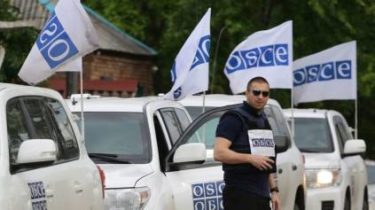 Over the past year, the OSCE special monitoring mission has doubled the presence of the Russians increased by several times the Serbs, Belarusians.

This was told by a Member of the humanitarian sub-group of the Trilateral contact group on conflict settlement in Donbas, first Deputy Chairman of the Verkhovna Rada Iryna Gerashchenko in an interview with TSN.

She also spoke about the requirement of the OSCE mission in Donbas. According to her, it is very important that everyone who works in SMM OSCE to be impartial and unconditionally belonged to his duties.

We’re being blackmailed hostages: Gerashchenko offers to supply the demand for the immediate release of all prisoners

“Projecting the conclusions that can be made with the presence of observers on possible peacekeeping mission, we put forward one condition and requirement: there can’t be Russian, the representatives of the aggressor country. Other countries are not the aggressors against Ukraine. They respect our territorial integrity and sovereignty. Other countries may have sentimentality for Russia, it happens, but they are not the aggressors. So from our side we do not have any reason to suspect that the representatives of these friendly countries have some flaws. But Russian there can’t be”, – said Gerashchenko.

In turn, she added that if we don’t speak honestly about the imperfections of this monitoring procedure, which appears very often, it would be wrong for our country.

“For almost three years running the mission, but we know that there is only one office – hour observation post near the village of Lugansk. And it only works on the Ukrainian territory, but no mirror. Moreover, the militants were equipped during this time, opposite the village of the Luhansk at mount St. Igor real Outpost”, – said Gerashchenko.