Fighters more than three hours, beaten on the outskirts of Avdeevka. A day in the area ATO 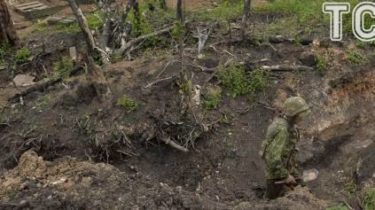 In General, from the beginning of the past day illegal armed groups 17 times violated the ceasefire in the Donbass. Losses among the Ukrainian military no.

Near Bogdanovka after a mine explosion killed Ukrainian military

Night fighters over 3 hours of various types of grenade launchers, heavy machine guns and small arms beat on the South-Eastern outskirts of the Town, and from APCS, double-shelled fortifications near zaitsevo. In addition, the night under fire appeared military in Maori and Nevel.

#Topod the Construction of the press center of staff ATO in 3.10.2017. The last day in the ATO area ended with a zoom …

Posted by the Press center of the ATO headquarters on Monday, October 2, 2017

On Lugansk direction for about 18 hours, the terrorists used grenade launchers and small arms on the outskirts of the village of Donets. And near the Crimean recorded work of 82-millimeter mortar.

At the seaside track after 18 hours, the silence remained.

Earlier in the ATO notice of the militants, who are wearing Ukrainian military uniforms, which could fall to the terrorists only by smuggling.