Lutsenko announced the completion of the investigation on economic crimes Yanukovych and Co. 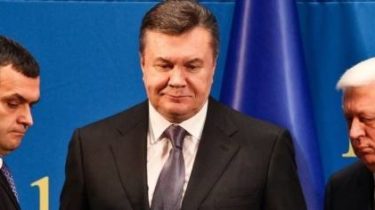 Prosecutor General Yury Lutsenko announced the completion of the investigation against the defendants in economic crime deprived the title of President of Ukraine Viktor Yanukovych and his entourage.

“We have completed the investigation on all key persons involved in organized criminal groups of Yanukovich in economic Affairs. Courts almost all have already given permission for in absentia proceedings. Is just another name of Mr. Stavytskyi (former Minister of energy and coal industry of Ukraine)”, – said the Prosecutor General.

“For a complete set, we will start to act in the courts on charges of an organized criminal group of Yanukovych in the economic part,” – said Lutsenko.

He also added that the case of the perpetrators of the shootings on the Maidan has already been tried and 5 October in the Metropolitan court will hold its first meeting.

“This is what was waiting for society all these years. This is what I put in the Parliament in the appointment as job number one. At the moment we can report that investigators and prosecutors have complied with their huge, tremendous job and we feel ready to charge Yanukovych, Zakharchenko, Yakymenko and several other officials of law enforcement bodies”, – he said.

We will remind, the first millions of dollars Yanukovych and his entourage went to the state budget of Ukraine. This was reported by press Secretary of the Prosecutor General of Ukraine Larisa Sargan.

Garfish also posted a video on his page, which shows the General Prosecutor Yuriy Lutsenko and staff of one of the banking institutions. In particular, Lutsenko told about SpecOps of money which are on accounts of PJSC “Ukreximbank”. Today, 25 September, in “Ukreximbank” began the first recalculation million of the total $ 200 million.