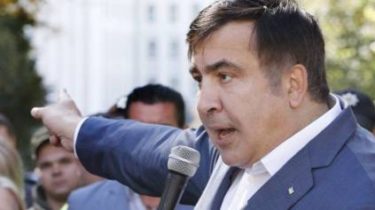 Prosecutor General Yury Lutsenko said the presence of the circumstances preventing the extradition of ex-Chairman of the Odessa regional state administration of Mikheil Saakashvili in Georgia.

“Despite the fact that the petition was received by the Ministry of justice, predagitatsionnoy verification is a function of the prosecution. After returning illegally of Mr. Saakashvili on Ukrainian territory, we have initiated this predagitatsionnoy check”, – Lutsenko told.

He noted that this audit should determine whether Saakashvili is suspected or accused Georgia of committing heinous crimes and whether there are circumstances that impede the extradition.

“Previously, I believe that such circumstances exist because Mr Saakashvili after illegally crossing the Ukrainian border has submitted documents to the migration service of the Ministry of interior that according to our international obligations prevent his extradition,” – said the Prosecutor General.

According to him, all the circumstances will be carefully considered and form the basis of the response of the Ministry of justice, this procedure will take a few more weeks.

Recall that Saakashvili was deprived of citizenship in late July, when he was outside Ukraine. He is a politician went back on September 10. He entered the territory of Ukraine through KP “shehyni”that in Lviv region, although I was going to make it through KP “Krakovets”. The border, he got the bus and crossed it illegally, together with 60 persons. Some of them have used force against the guards. The court found the politician guilty of illegally crossing the Ukrainian border and ordered to pay 3400 hryvnias of a penalty plus court fee 300 UAH.