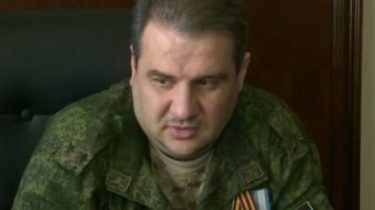 The militants “DNR” detained two suspects in the bombing of the car, “Minister of income and fees,” Alexander Timofeev , nicknamed “Tashkent”.

Detainees were former fighters “national militia of LNR” Igor Eutuchin and Denis Derbyshir. They were in search of their own supporters: “the Prosecutor General LNR” it is said that they were looking for “the robbery made by a group of persons upon a preliminary collusion, with the use of firearms.”

According to militants, both were residents of Lugansk.

Living in the middle of the cabbage. “The Minister DNR” after the assassination attempt actively distributes interview

Eutuchin and Derbyshir also entered into the database of the Center “Peacemaker”. Here place of birth Avtoshina specifies the Crimea.

According to the “Peacemaker,” Igor Eutuchin was listed as a sniper in the 1st assault group of the battalion “dawn”, and Denis Derbyshir – bomber in the 4th assault group in the same battalion.

Just on suspicion of attempted Timofeyev detained six people. One of the detainees at a press conference in the occupied Donetsk said that was allegedly recruited people who were presented by employees of the main intelligence Directorate of the defense Ministry of Ukraine.

In Syria killed a Russian General who commanded the militants “DND”, media

We will remind, on September 23 around 8:30 a.m. in the prospect of Peace in the center of Donetsk thundered two explosions. Later in the “security agencies” so-called “DNR” said that in the occupied Donetsk there was an attempt to “Minister of revenues and duties DND” Alexander Timofeev.

“There were two explosions, an attempt to “Minister of revenues and duties DND” Timofeeva. He’s in critical condition,” – said in the message.

Later, one of the news sites of the militants, citing a source in the “interior Ministry” has released information about detention of Ukrainian organizers of undermining the so-called “Minister”.

Meanwhile, the Ukrainian interior Ministry confirmed the attack on “Minister of the DNI” and called it a possible reason.