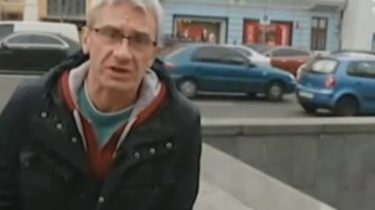 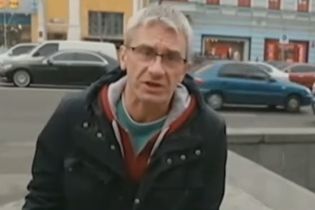 The security service of Ukraine at four in the morning escorted home another Kremlin propagandist. The correspondent of the Russian channel NTV Vyacheslav Nemyshev was detained overnight in the capital. This contributed to the caring of Kiev, which saw the man with the Moscow accent on Bessarabka Kiev is eating cake and something says to the camera.

He’s just on the parapet in the center of Kiev cut the cake, ate out a hunting knife and said something about the budget of Ukraine.

A picture the night before I saw a public activist Sergey Foreman. Says, passing by and decided to ask that people take.

“People are working with professional equipment. So was the technique of mark-4, it is worth $ 3,500. And when you come and ask what they shoot, they began to gather,” – says public activist Sergey Foreman.

Hearing a Moscow accent, Sergey includes the mobile camera and decides to spend unknown. The journalist in question is silent, picks up his pace. Then the activist calls the police. Cops come, ask for documents and then it turns out that silent – the correspondent of Kremlin television and has the accreditation of “DNR”.

The police and the activist lead the Russians to the police Department. The Detainee Vyacheslav Nemyshev. The correspondent of the “Central television” – a propaganda program on TV grew. There about the arrest learned quickly. And then their viewers lied: “In some Ukrainian media have reported that our colleague is charged with a criminal offence”.

Nemesea police reports, the security Service of Ukraine. Find out where and the identity of Russians, and what he did last time.

Nemichev from spring 2016 to fall 2017 “worked” temporarily occupied by terrorists territories of Ukraine. He produced a number of false anti-Ukrainian materials for the media commissioned by the Russian curators and in the interests of elite fighters.

Over the last two months Nemyshev is the third promoter of ROS-TV, which Ukraine has expelled from its territory. In the summer of lying in the air went home his colleagues Anna Kurbatova and Tamara Nersesyan.

Vyacheslav Nemyshev now on-Federal – land. To him, the SBU has banned entry to Ukraine for three years.