The two Chechen wars and the annexation of Crimea. As Mordvin, the Prosecutor in the Republic have imposed order in the “DNR” 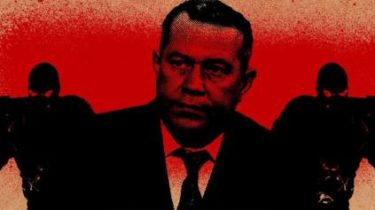 To help the leaders of the “L/DNR” Alexander Zakharchenko and Igor Plotnitsky, the Kremlin sends generals and political advisers. TSN.ia together with the counterintelligence of SBU collects data about Russian citizens who take part in the creation of quasiregular.

Next attention was drawn to the so-called former attorney General “DNR”, 47-year-old Ravil Khalikov, a native of Mordovia.

The Mordovian Prosecutor with a military background

Prime Minister Ravil Zachariewicz was born on 23 February 1969 in the village of Belozerye Romodanovsky district of Mordovia. 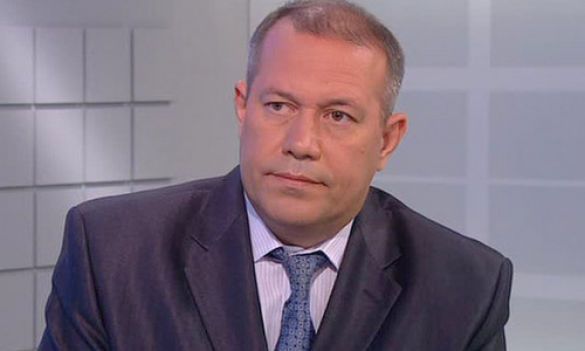 In 1987 he graduated from the Chelyabinsk legal technical school on a speciality “Jurisprudence in the system of social security”. After a break for military service during the back to school, enrolling in the law faculty of the Mordovian University. N. P. Ogarev.

2000 went to serve under contract by the commander of the parachute platoon.

Since December 2001, and until recently headed the Department for the protection of the rights of ownership of the Territorial administration of Rosimushchestvo in Moscow.

In 2002 Ravil Khalikov graduated from the Russian Academy of state service under the President of the Russian Federation with specialization “Finance, credit and taxes”. In 2004, he took professional retraining in the program “governance and national security”.

He has the rank of major. In 1995, he participated in military actions in Afghanistan and also in Chechnya, where he headed the investigative and prosecutorial group of Caucasian regional Prosecutor’s office. Got as well for the second Chechen war in 2000. Awarded the order of Courage, and 16 medals.

Prime Minister is the Vice-President of the Russian Taekwondo Federation, black belt, 1 Dan. He is fluent in Tatar, knows a bit of German. Is the Deputy head of the Interregional public organization “Mordovia fraternity” in Moscow. Member Of “United Russia”.

Married. Has a son and three daughters, the youngest eight years. Also have two older brothers. One – the Deputy head of the Russian economic University.Plekhanov, the other manages her own farm.

Since 2000, Mr. Khalikov has traveled extensively. The most popular tourist destination had Turkey, were also in Croatia, Greece, Tunisia and Cyprus.

To work on Donbas terrorists Khalikov constantly lived in Moscow.

Conscientious service during the annexation of Crimea

In March 2014 Khalikov took part in the annexation of the Crimea. During the capture of the Peninsula he was assigned to command a reconnaissance platoon.

About it journalists were told by his brother Fjarit: “Brother prior to the appointment of the attorney General “DNR” worked in the Federal property management Agency in Moscow. When certain events took place in Ukraine, he took an unpaid leave and flew to the Crimea. There he supported the “militia”. 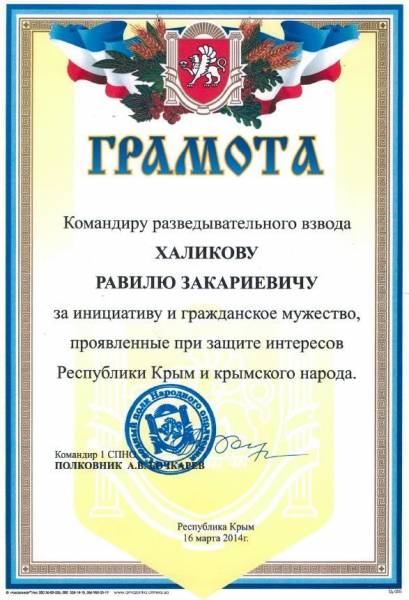 Home “Prosecutor” and the enforcer of terrorists “DNR”

“Vacation” Khalikov in Crimea is not over. In early may he was sent to Donetsk, which was seized by terrorists. Here he is in the same rank of commander rozwiedziona “supporting the fraternal people of the South-East of Ukraine.”

In particular, received the award for several military operations, including on the territory of Donetsk airport.

Obviously, Halikov performed well as during the annexation of the Crimea, and during terrorist activities in the Donbas, so at the end of may 2014, despite his prosecutorial experience, he singled out one of the highest positions of quasisecurity – “attorney General “DNR”. And was awarded the rank of actual state counselor of justice. Among his first actions after taking office was the opening of a “case” against the owner of SCM Rinat Akhmetov about the “newsplace taxes” and “attempting to overthrow the government”.

In June the chief “Prosecutor” of the terrorists said in an interview with TV channel “Russia 24” that in the Eastern regions killing many “militants” and civilians, and that the Ukrainian aircraft carried out bombing and snipers shot civilians.

He also repeatedly gave detailed interviews and other Russian and separatist media, like the “Russian spring”, the “Free press” and the like. He claimed that “DNR” will live by the laws, and expressed confidence that “America will fight to the last Ukrainian”. 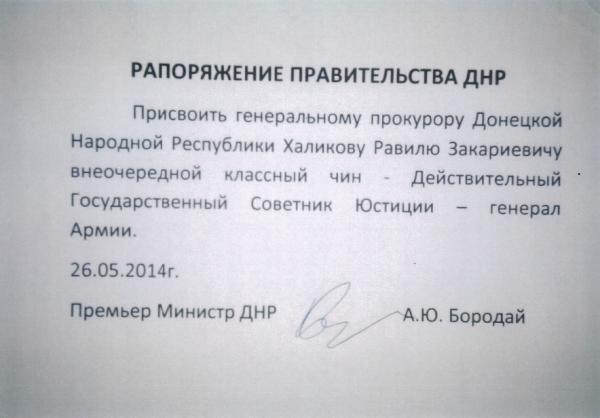 According to the brother, Khalikov in the Donbass was called “the fighting Jews”, because in addition to their official duties, he is involved in combat operations.

For Khalikov got a lot of money. In accordance with the “price list” that fell into the hands of counterintelligence of SBU, his salary amounted to 3 thousand dollars. For comparison, his deputies receive 2,5 thousand dollars, and ordinary prosecutors for $ 550. 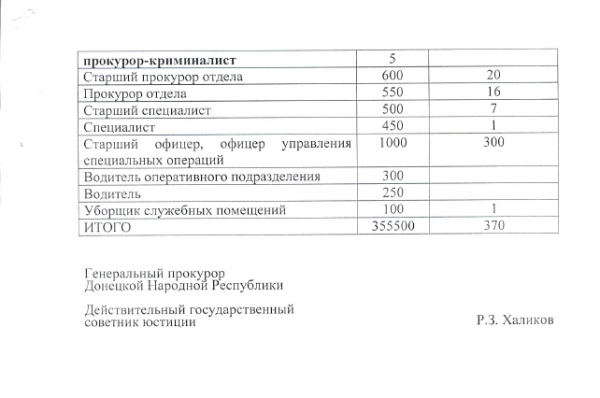 The Prosecutor General’s office of Ukraine filed a case against the new “attorney General” for the creation of a terrorist organization.

“It is established that in may of this year (2014 – ed.) this radically-minded citizen who took part in the terrorist organization “DNR”, opposed the activities of state authorities and local self-government. So, for the purpose of violent overthrow of the constitutional system, seizure of state power, he was appointed to the position of attorney General “DND”, – stated in the press service of the GPU.

However, the criminal case Khalikov has not stopped. After a few months he was promoted was appointed “Deputy Prime Minister” to power the “DNR”. In this position, he was replaced by Vladimir Antyufeyev, who experience Donbass scored in Transnistria, where was the “Minister of state security”.

After serving his term in the Donbas, Prime Minister returned to Moscow, where, according to local media reports, in early September, I received a position of assistant to the head of the Main investigation Department of the investigative Committee (IC IC).

“Khalikov is responsible for the discipline. It keeps track of what state you come to the service staff, store evidence, documents and so on. It is known that his team of about ten people. They conduct inspections several times a week”, – write mass media with reference to the news telegram-channel Mash.

However, official confirmation of this information was never published.