Reintegration of Donbass, which provides for adopted in the first reading the law. The main thesis 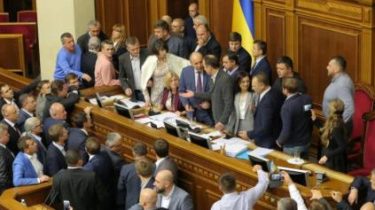 On Friday, October 6, with fights, smoke bombs and accusations of betrayal , the Verkhovna Rada adopted the law on the reintegration of Donbass in the first reading.

In addition, a law was passed that year extends so-called “special status” of the occupied territories.

Before the voting of the laws removed the obligation to fulfill the Minsk agreements and he added a condition: the special status will take effect only when Donbass withdraw foreign military forces. Other requirements as may make the law the point of reintegrating annexed Crimea or to indicate the dates of the beginning of the aggression – your reflection in the document is not found.

In General, the laws on peculiarities of the state policy for ensuring Ukraine’s sovereignty, in particular, provide for:

The Russian Federation identified by the state agresor;

– The temporary occupation of the territories is illegitimate and does not create territorial rights of the Russian Federation;

– Legal acts, which are issued by the occupation administration of the Russian Federation are invalid and do not create legal consequences;

– Ukraine is not responsible for the illegal actions of Russia on the occupied territories;

– All military units in the zone of the ATO are subject to the joint operations staff of the Armed forces of Ukraine.