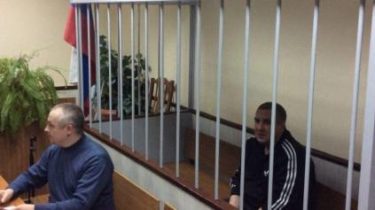 Controlled by the Russian occupying administration “Supreme court” of the Crimea, extended for two months the arrest of two defendants in the case “Crimean saboteurs” Evgeny Panov and Andrew Sachau.

Meeting Panov was closed, but the Ukrainian lawyer sought to have the decision announced publicly. Meeting Sahaja also occurred behind closed doors.

In the end, both will stay in a Russian prison at least until 9 December.

“If you do not believe, then there is no need to live”: the political prisoner Evgeny Panov wrote a letter to Ukrainians

Defender Evgeny Panov Sergey Legostaev noted that the leadership of the detention center restricts his client’s right to receive information. Newspaper delivered to Ukrainian, steal. Do not give a subscription. And literature in prison except religious.

Videoarta theft or diversion: as Eugene gentry was in occupied Crimea

Recall, 10 August 2016 of the Federal security service of the Russian Federation said about prevention in the occupied Crimea, acts of terrorism, which was allegedly prepared by the Main intelligence Department of the Ministry of defense of Ukraine. Also, the FSB told about the elimination of “intelligence network” of the Ukrainian intelligence in the Crimea among citizens of Ukraine and Russia.