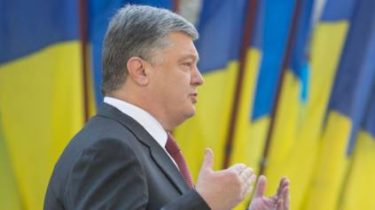 The President of Ukraine Petro Poroshenko enacted the decision of national security Council and defense of Ukraine of September 13, “On the concept of providing counter-intelligence regime in Ukraine”.

It is noted that Poroshenko signed the corresponding decree №310/2017.

“The President instructed the Cabinet of Ministers jointly with the security Service of Ukraine, Main intelligence Directorate of the Ministry of defence, the foreign intelligence Service of Ukraine, Management of state protection, Administration of State service of special communication and information protection of Ukraine and the National Commission exercising the state regulation of communications and Informatization to develop and approve, within three months in order to plan the implementation of this Concept and ensure its implementation”, – stated in the message.

Monitoring the implementation of the NSDC decision, promulgated by the decree vested in the Secretary of the national security Council and defense of Ukraine. According to the press service of the President, the document will come into force from the date of its publication.

Recall, 13 September at the meeting of the Council of national security and defence had accepted the concept of providing counter-intelligence regime and development of the system of government in situations of emergency and special period.