In China, a man screamed in horror when it began to “crack” the glass bridge at a height of 1180 m 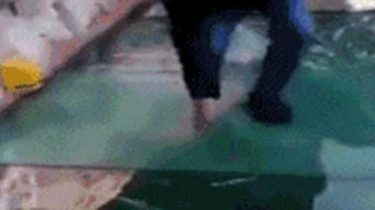 In the Internet appeared the video, as in China in Hebei province under the feet of men began to crack glass bridgeinstalled at a height of 1180 m above sea level.

The video shows a man walking on the bridge as under it on the glass cracks, and you hear the crackling. Man I went down and started screaming. At the same time on the bridge there are other people and they look perfectly calm.

In China, at an altitude of 180 metres a tourist broke a glass bridge

When the video went viral, the County administration East Taihangshan released a statement which said that the cod is not real. This is the panel with special effects. It was installed in several places on the bridge to attract tourists.

We will remind, recently in China, in Hunan province, opened the world’s longest glass pedestrian bridge. The length of the bridge is 430 meters long and 6 meters. It is built at an altitude of 300 meters and connects the two mountain rocks in Zhangjiajie national Park, where they filmed the movie “Avatar”.