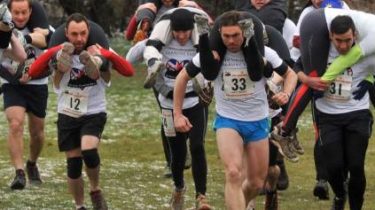 In the US, hosted the annual championship wearing wives. To participate allowed only married couples, according to a story TSN.19:30.

The participants had to overcome the obstacle with his wife on his shoulders. Gripping in its second half, women hung upside down and tried not to hide and not to SIP the mud. The swamp was the most difficult stage – there fell, dived, and eventually went the distance.

Triumph was the family from Virginia. That passed the way of UPS and downs most likely, the winners received 12 cases of beer and a check for $ 630.