The persecution of Ukrainians in Crimea and cooperation in the defense sphere. What Poroshenko said and Erdogan 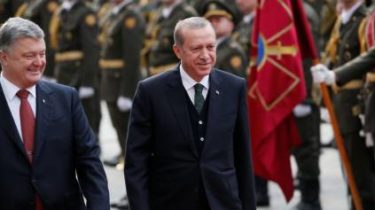 The President of Ukraine Petro Poroshenko and his Turkish counterpart, Regea Tayyip Erdogan during a meeting in Kiev discussed human rights violations in the occupied Crimea and agreed to fight to protect the rights and freedoms of citizens of Ukraine.

About the Ukrainian leader said the outcome of the negotiations.

Erdogan arrived on Bankova to Poroshenko appealed to the Ukrainian military

“Together with the President of Turkey stressed the inadmissibility of human rights violations in the Crimea and the repressive actions of the occupying power on the Peninsula. Ahtem Chiygoz, Ilmi Umerov, Nicholas Seeds – the list of victims of political repression is growing. Today we agreed to continue to fight for protection in the Crimea the rights and freedoms of citizens of Ukraine in all international mechanisms, in particular the monitoring”, – he stressed.

According to Poroshenko, Russia’s attempts to legalize the occupation of Ukrainian territory are doomed to failure.

“We have just concluded a meeting of high strategic Council between Ukraine and Turkey. It took place in a very trustful and constructive atmosphere and I am extremely grateful to the Turkish colleagues for this approach”, – said the Ukrainian President thanked Erdogan for his support for the sovereignty of our state.

He also noted that the meeting lasted longer than planned and stressed that this gives grounds for optimism concerning the development of bilateral cooperation.

“We would be very interested in increasing the representation of Turkey to the special monitoring mission of the OSCE. We are grateful for the very clear and well-organized work of the special monitoring mission, headed by the representative of Turkey. Also in the near future, particular importance will be for us to support our partners, in particular Turkey, the deployment of the UN peacekeeping mission in the territory of certain districts of Donetsk and Lugansk regions”,- said Poroshenko, adding that it was also the subject of negotiations.

The head of Ukraine also said that contacts between Ukraine and Turkey has become more efficient, including in such sensitive areas as defence, national security and law enforcement.

“We are pleased with the cooperation in the defense industry, aviation, space,” he said.