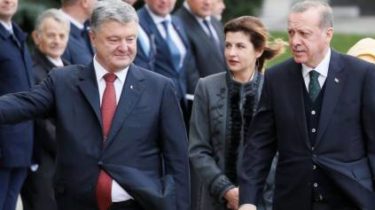 Meeting of the presidents of Turkey Recep Tayyip erdoğan and Poroshenko lasted much longer than was stipulated in the Protocol. This is noted in the social network Facebook, the press Secretary of Ukrainian President Svyatoslav Tsigalko.

Erdogan arrived on Bankova to Poroshenko appealed to the Ukrainian military

“Instead of the planned 45-minute, one-on-one talks between the presidents of Ukraine and Turkey lasted three hours,” he said. Tsigalko also added that Turkey is among the five largest trading partners of Ukraine, and together with Erdogan in Kiev there has arrived the big delegation. “Today will be signed nine intergovernmental agreements, including on investment protection and double taxation”, – said the speaker of the Bank.

In addition to economic, the meeting of the presidents will have a political effect. “Ankara continues to support the territorial integrity of Ukraine and introduction of the peacekeeping mission in the Donbass”, – assured the representative of Poroshenko.

As previously reported, the Turkish President Recep Tayyip Erdogan on 9 October will pay an official visit to Kyiv to participate in the Strategic Council of high level between Ukraine and Turkey. Erdogan will also meet with President of Ukraine Petro Poroshenko in the format “tete-a-tete”. The head of Turkey also plans to meet with speaker of the Verkhovna Rada Andrew Parubiy and Prime Minister Vladimir Groisman.