“The temple of art of the XXI century”. Poroshenko officially opened the Kyiv Theatre on Podol 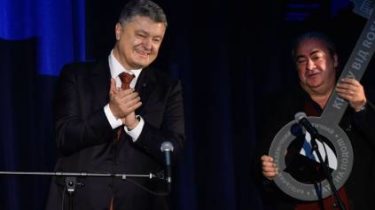 The President of Ukraine Petro Poroshenko with his wife Maryna took part in the opening of the Theatre on Podil.

“Over the last three years in Ukraine and in Kiev, much is being done for the first time. Our theater begins with a lift for people with disabilities”, – said Poroshenko, calling the Theatre “a temple of art of the XXI century” and assuring that “we will all be proud of”.

According to the President, today’s opening of the theater is a unique phenomenon, since the room was built for the funds of a patron.

VideoCAM looks like a theater on the inside hem

“Theatre built at the expense of the Corporation “Roshen” and is a gift to the city of Kiev. The works are estimated at 174 million UAH. All work is completed, industrial and stage equipment installed and configured. The theater building is ready for use in fact and law. In confirmation of this was handed over the symbolic key of a new theatre community in the city of Kiev”, – said the press service of the head of state.

Separately, Poroshenko noted that the opening of the Theatre on Podil is important for the cultural development of Ukrainians, especially in the conditions of Russian aggression.

It is also reported that the Theatre on Podol cooperates with various organizations for socially vulnerable segments of the population and the military.

Recall the opening of the Theatre on Podol planned for may 2017, but because of the negative reviews about the updated facade of the building to the Kyiv city state administration established a working group to propose a solution to resolve the conflict in the society.