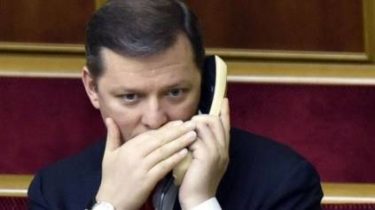 The leader of “Radical party” Oleg Lyashko has made in his Declaration 15.9 million UAH from the sale of real estate of the said Alexander Ryzhenkov – the man with the same name is a former Deputy from the Party of regions voted for the “dictatorial laws on January 16”.

Lyashko has made the appropriate changes to his Declaration of October 9, reports Ukrainian Pravda.

In April, June and September of this year the leader of the radicals declared for 270 thousand hryvnias of receipts from rental property the same Rygenkova.

The paper appealed to the press service ljashko to comment on what kind of property is sold to the MP, but has not yet received a response.

Now the Declaration of “main radical of the country” indicated that he owns three apartments in Kiev, apartment house in Kozin, Kiev region, office 182 sq. m. in Kiev, garage, Parking space and more land in the City.

We will remind, in the spring of 2017, the NAB filed a case against the leader of “Radical party” Oleg Lyashko. The anti-corruption Bureau suspects of the people’s Deputy of illicit enrichment, and the MP calls the case a “political order”.

The basis for the institution of criminal proceedings became the investigations of journalists, where they spoke about the movable and immovable property of the family of the Deputy and his business interests. In particular, in the years 2016-2017 politician who never formally had a business, bought a house for 15 million UAH, and another one for 5 million UAH bought his civil wife Rosita.