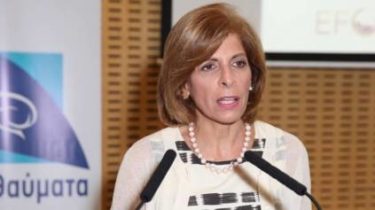 The new President of the parliamentary Assembly of the Council of Europe became Stella Kyriakides from Greece.

About this in Facebook poudel MP, Vice-speaker of the Verkhovna Rada Iryna Gerashchenko.

She noted that Crokes supported 132 members of PACE.

“The third round was elected PACE President. They became Stella Kyriakides, which in the third round supported 132 members of PACE. Took part in the vote, 217 , 1 spoiled ballot, 84 supported, Singerie, 132 by Kyriakides. Her presidency will be the shortest up to January 2018. It is from the EPP group, but, in fact, acted as the self, because the group of EPP by a majority of votes supported the Emanuel Zingeris. But had violated the principle of quota, the election turned into a formality, and the real vote,” she said.

Recall Kundalini the President of PACE Pedro Agramunt voluntarily resigned. According to Agramunt, he made the decision “for personal reasons”.

The scandal surrounding Agramunt unfolded after reports of his visit to Syria. He admitted that he had made a mistake when I fly a Russian plane. Agramunt said that the Russian lied to him and framed, and that the voluntary resignation he will not leave.