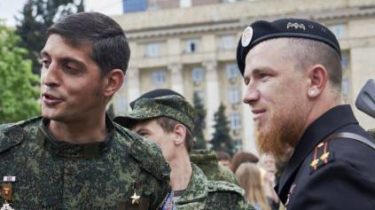 Russian writer and henchman of fighters of “DNR” Zakhar Prilepin said that supposedly knows the names of the killers of the terrorist leaders Mikhail Tolstoy (“Givi”) and Arseniy Pavlov (“Motorola”).

In eliminating terrorists, the Russians accused the Ukrainian saboteurs. One of them allegedly was a woman.

“Despite all the chatter of the Ukrainian side, I know – even the names – who killed “Motorola”, who killed “Givi”. Did the side of Kiev. The murders involved the saboteurs who were directly in Donetsk. One case was a woman”, – quotes Prilepin, RIA “Novosti”.

Also a henchman of the Donetsk terrorists added that he wants to put in Slavyansk, a monument to the slain “Motorola”.

As previously reported, the battalion commander of the Donetsk terrorists “Somalia” Mikhail Tolstoy (“Givi”) was killed on 8 February in his office in the occupied Donetsk. It was reported that the building was shelled with rocket arms “bumblebee”.

His henchman – “Motorola” – was killed in October 2016: in the Elevator house in Donetsk, where he lived, worked explosives.

Video”Givi”, let’s goodbye: in Donetsk goodbye to a fighter people were driven by force