Gave their lives for the European future of Ukraine: Poroshenko unveiled a commemorative “Star of the Heavenly Hundred” in Strasbourg 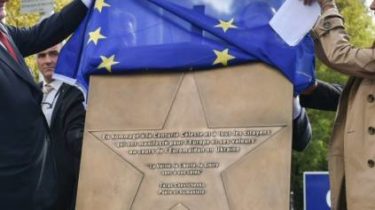 The President of Ukraine Petro Poroshenko took part in the opening of the memorial “the stars of Heaven Hundreds” in Strasbourg in front of the Council of Europe.

Poroshenko recalled that in October-December 2013 millions of Ukrainians took to the streets of Central Kiev and other cities. He added that for the criminal actions of the previous government killed the Heavenly Hundred Heroes. “They gave their lives for Ukraine’s European future”, – said Poroshenko.

According to the President, Euromaidan was a turning point that led to the present awakening of the Ukrainians as a nation. “A nation that is native to the European family. A nation that is a pillar of European values. A nation pays dearly for the European future. Great price for a future to United Europe was stable, safe and peaceful, was paid by the sacrifice of the Heavenly Hundred”, – he said.

The President stressed: “it is very important that in the heart of Europe we have this star, dedicated to the Heroes of the Heavenly Hundred and the Bromide as a recognition of how important Ukraine and Euromaidan for Europe-how important are our values.”

The project “European plate” (“Dalles de l’europe”) for installation along the building of the Council of Europe metal plates with the image of the star with a commemorative inscription, was launched in November 2014.

Videoporoshenko in Strasbourg will open “Star of the Heavenly Hundred”

Recall, October 5, at the Alley of Heroes Heavenly Hundreds in Kiev was desecrated the memorial sign. Plates with the names of the victims were beaten 43-the summer man, the native of Lugansk, who now lives in Sevastopol. Husband thinks that because the Heavenly Hundred on the Donbass war. He later self-surrendered to law enforcement authorities.