In Kiev on the bridge, the car rammed the moped, the driver of “two-wheeled” killed 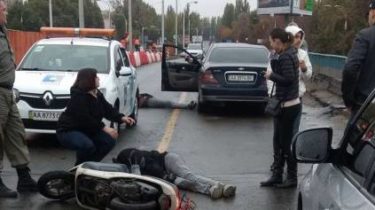 In Kiev, on the Boulevard of Vaclav Havel on the bridge the accident occurred, which injured the driver of a moped.

Eyewitnesses report about it in the “My Gratifying”.

“Aside Berestycki in 9.10 crash on the bridge. Hurt the guy on the moped,” – said in the message.

As eyewitnesses told, the accident occurred due to “terrible circumstances”, since, according to preliminary data, anybody from participants of road accident did not break the rules.

It is also noted that the driver of the moped, which at the time of the collision was wearing a helmet, was initially unconscious and subsequently it became known that the injuries the man died.

In turn, the driver of the car, seeing the consequences of the accident, lost consciousness.

We will remind, earlier near the Kiev sea, the SUV jumped into the oncoming lane and collided with a minivan, whose driver died on the spot. The culprit of the fatal accident may be the father of the Prosecutor.