“Three criminal cases in the Russian Federation”. Poltorak assured that one of his suspects in the theft of the Deputy’s nowhere to run 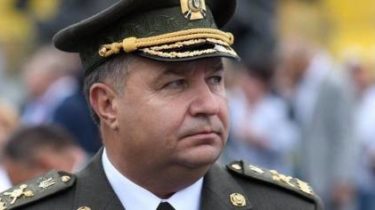 Deputy Minister of defence of Ukraine Igor Pavlovsky, the detainee on suspicion in corruption, nowhere to flee the country.

This was stated by the head of the defense Ministry Stepan Poltorak, says the TV channel “112 Ukraine”.

“General Pavlovsky performed their duties from the first day of the aggression, they performed quite professionally, was the leader of the anti-terrorist operation “Mariupol” during active hostilities there. But if he involved in the crime, he should answer for it. Pavlovsky running precisely nowhere. Being the head of the anti-terrorist operation “in Mariupol”, he received three criminal cases in the Russian Federation”, – he stressed.

At the same time about a possible flight to Europe or the Islands Poltorak expressed doubt, noting that, according to the Declaration of Pavlovsky has no money for it.

“I think all the issues associated with charges, it is necessary to ask the NAB, which filed a case and conducts investigative actions”, – the Minister added.

Recall, October 11, detectives NABOO under the procedural guidance of prosecutors of SAP carried out a number of searches, in which on suspicion of involvement in the crime at the time of purchase of fuel detained two officials of the defense Ministry. Pre-judicial investigation on these facts the detectives NAB began in September of 2016.

Detained the Deputy Minister of defence Stepan Poltorak and Igor Pavlovsky, Director of the procurement Department Vladimir Gulevich. The investigation revealed that employees of the Ministry of defense of Ukraine by previous concert with representatives of commercial enterprises agreed to purchase fuel at unreasonably high price, which led to the embezzlement of public funds in the amount of more than 149 million.

Videosrecently NABOO detained officials of the defense Ministry, which plundered the funds for the ATO