At the Kyiv-Mohyla Academy found a loaded revolver last century 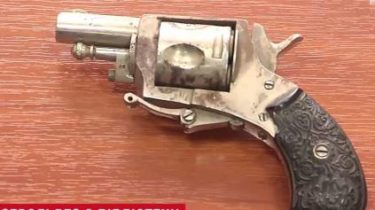 At the Kyiv-Mohyla Academy found weapons in the late XIX century. The revolver is engraved: engraved numbers and crown, says the story TSN.19:30.

The gun was discovered behind a bookcase that hasn’t been moved more than 150 years. Antique gun found assistant to the President “mogilyanki” Catherine Maxim. The weapon was in the old academic building the building, built by Ivan Mazepa, where the reconstruction of the premises. “It was in a pile of garbage and construction and not just construction. Someone threw away or lost it”, – said the representative of the KYIV Mohyla Academy.

Video settings Kyiv-Mohyla Academy during the repair, found the gun of 100 years ago

Who owned the gun, it is difficult to determine. After the arrival of Soviet power in the building of the Kyiv Mohyla library posted Dnieper flotilla – it is possible that some of the soldiers lost him. And in parallel there was a bookstore, so there is another version that one of the visitors could put the guns behind the cabinets. “Given the age of this weapon, and given the period, the events that took place on the territory of Ukraine, this weapon could be in the hands of any person”, – said the curator of the University Museum Taisia Sidorchuk.

In Kiev in the Park man opened fire with a revolver

Discovery is a 6-shooter revolver, the drum of which is missing one bullet. This is a small, pocket gun with engraving in Latin letters and digits, it also cut out a small crown. The finding is similar to the French gunsmith Charles Francois Galan, whose firm at the end of the nineteenth century produced a large number of handheld weapons. Revolvers still had the name “Velodrom”, as it was designed specifically to protect cyclists against dog attacks. According to specialist-in-arms Denis Dubrovsky, a detected sample is a very similar copy. “It was a very successful model for self-carry of a revolver that she started to copy almost all companies. President Gardfield attacked in this revolver. Maybe not this one, but this model”, – said the expert.

Antique discovery is already seized by the police. Weapons must disarm and return again in the “Kyiv-Mohyla Academy”, where it wants to put in the Museum of the Academy.

Earlier in October, in Kiev and Zaporozhye law enforcement officers detained five citizens of Ukraine involved in illegal sale of arms and ammunition. Attackers have developed an extensive network of sale of firearms to representatives of criminals on the territory of Ukraine