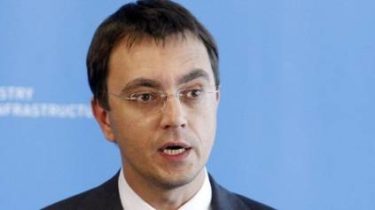 It is stated in the materials of Solomyansky district court of Kyiv.

As stated in the text of the document dated 10 October, detectives NAB to conduct pre-trial investigation in criminal proceedings from may 26 this year by the Declaration of false information and unlawful enrichment by the Minister of infrastructure of Ukraine.

VideoPlayer Omeljan not hide how much his rest

In particular, the investigators found that from December 10, 2016, Omeljan, his wife and their son began to live in the home for an estimated cost of 7 million hryvnias, which is privately owned by a cousin niece wife Omeljan.

However, according to the State fiscal service, a relative of a Minister had not received such income, to be able to buy an expensive house.

In turn, Omeljan by completing the Declaration for 2016, indicated that he lived in the apartment of his wife, and the house for 7 million (250 times the subsistence minimum for able-bodied persons – approx.ed.) the document contains no data.

“In the period from 23 March 2009 to 23 March 2011 mother cousin niece wife Omelyana gave power of attorney to Omeljan on the right of control car brand Lexsus RX 350, which testifies to their trust relations”, – added in the NABOO.

VideoPlayer Omeljan admitted as a wife-the designer changes his wardrobe

In addition, the Minister has not indicated in the declarations on the income for 2015 and 2016 that used BMW X5 2015 release, an estimated value of 1.59 million hryvnia, which belongs to his brother.

“The circumstances regarding the use of the Omelyan the above car is confirmed in particular voluntary insurance contracts concluded between PJSC “Insurance company “UNIQA” and the brother of the Minister that specify the personal mobile number of Vladimir”, – assured the detectives.

In addition, the investigators found that the niece of the wife of Omelyan in September 2012, left Ukraine and didn’t come back. Total income of father, mother, brother and niece for the period from 2012 to 2016 totaled 2 million 150 thousand hryvnias 172 (inheritance), while during the same period, they acquired 5 properties and two cars.

Thus, according to the pre-trial investigation body, the head of the Ministry of Infrastructure has submitted false information in the Declaration, so his actions are seen signs declaring false information.

In connection with the foregoing, the detectives NAB asked the court about getting a temporary access to documents and mobile phone numbers Omelyan and his family, as well as drivers.

“The petition is to satisfy partially”, – stated in the decision of the court. In particular, the NEB granted temporary access to the mobile phone number used by Omeljan. The court’s decision is not appealable.

Earlier, the Ukrainian media referring to the French tabloid l’express reported that the Maybach is preparing to release 136 luxury cars the new model, and among the names of their future owners was the wife of Volodymyr Omelyan.

In turn, the Minister of infrastructure Vladimir Omelian denied the purchase of luxury car Maybach, which is worth almost three million euros.

“This is absurd. On the other hand, I’m glad because that called sky-high price, which even for the Ukrainian oligarch, apparently sensitive. I just are not. If I had the money, would have put them in some normal business, and did not buy some crazy toys, “- said the Minister.