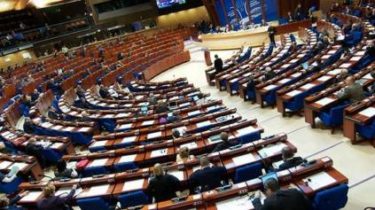 Blitzkrieg for the return of the Russian delegation at the session hall of the parliamentary Assembly of the Council of Europe has failed.

This was announced by the Chairman of the permanent delegation of the Verkhovna Rada of Ukraine to PACE Vladimir Aryev in Facebook.

“So, bottom line: blitzkrieg-scenario for Russia in the PACE broke jointly. But let’s be very vigilant. Thanks to the Ukrainian delegation! Again proved that only the joint action yielding results. Elena Sotnik and Gregory Logvinsky yesterday fought on the Joint Committee to prevent the implementation of a quick scenario… but the work of Ambassador Dmitry Kuleba – all above all praise” – he wrote.

So, bottom line: blitzkrieg-scenario for Russia in the PACE broke jointly. But let’s be very vigilant. Thank you Ukrainian…

According to him, as a result of the PACE Bureau from the Secretary General of the Council of Europe thorbjørn Jagland, demanded a tough stance in the negotiations in Moscow, and in General to sue the Russian Federation for nonpayment of dues.

“The atmosphere is changing. And changes not itself, and through joint activities and synergies of Ukrainians in the Council of Europe”, – said Chairman of the permanent delegation of the Ukrainian Parliament in PACE.

We will remind, in April 2014 the PACE imposed on Russia sanctions depriving Russia of voting rights. Through this, the Russian delegation cease participation in PACE. 2016 and 2017, they sent to Strasbourg a list of his delegation, thus formally avoiding the extension of the sanctions.