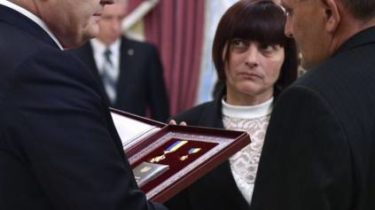 President Petro Poroshenko for exceptional courage and heroism was awarded the title Hero of Ukraine with presentation of the order “gold Star” 23-year-old commander of the reconnaissance branch of the 15-th separate mountain infantry battalion 128-th separate mountain infantry brigade senior soldier Alexander Capucho, who died in the battle with Russian aggressors, defending the sovereignty and territorial integrity of Ukraine.

The award the President gave the parents of the defender of the Princess Ludmila and Vasily Ivanovich.

Poroshenko said that in February 2015, during performance of a fighting task group of scouts, headed by Alexander, courageously defended the position from the superior forces of the Russian mercenaries. In the most difficult moment of the battle a group of the enemy threw a grenade. “Alexander did not hesitate covering for a friend, and he died. Positions were withheld,” he said.

“The feat of Alexander will forever remain in people’s memory, becomes a symbol of strength and fighting spirit of the defenders of the Ukrainian land”, – stressed the Head of state.

Background: the commander of the intelligence unit Alexander Capus may 2014 participated in the antiterrorist operation, including the battle for the airport “Lugansk”.

We will remind that earlier the President of Ukraine Petro Poroshenko on the eve of the day of defender of Ukraine congratulated the servicemen touching video.

“On the eve of the day of defender of Ukraine would like to Express my sincere gratitude to all military personnel for heroism and courage, sacrifice and valor, patriotism and loyalty to the oath,” wrote Ukrainian guarantor.

The video got footage from a military parade on the independence Day of Ukraine and training of fighters.

“The strongest iron in the Ukrainian army, which is made our soldiers,” – said Poroshenko.