The strongest iron, which is made by the military. Poroshenko congratulates Ukrainian defenders 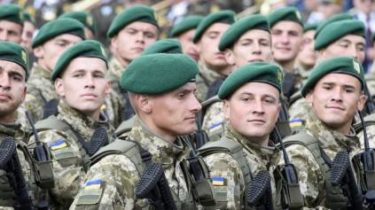 The President of Ukraine Petro Poroshenko on the eve of the day of defender of Ukraine congratulated the servicemen touching video.

“On the eve of the day of defender of Ukraine would like to Express my sincere gratitude to all military personnel for heroism and courage, sacrifice and valor, patriotism and loyalty to the oath,” wrote Ukrainian guarantor.

The video got footage from a military parade on the independence Day of Ukraine and the teachings of men.

“The strongest iron in the Ukrainian army, which is made our soldiers,” – said Poroshenko.

We will remind, earlier the Ukrainian military from the Donbass told how they will celebrate their professional holiday.

“That they have in the civilian world holiday, and the holiday – cooked to eat. Stood up alive – and the feast is you. And the guys that were still alive, and has returned home alive,” said the fighter with the Callsign “Pear”.