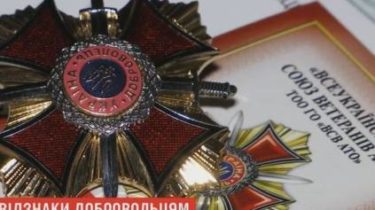 National distinction of “Knight’s cross” in Chernigov awarded volunteers of the ATO. This is the fourth ceremony of nominees for the award determined by the volunteers. Heroes in the audience welcomed with applause.

Already awarded 80 awards, with some of the guys are still in court, officially confirming the status of a participant ATO.

“I saw these pictures, I realized I can’t just watch. Need to actively take part in it. I decided to quit my job and go volunteer for the front,” says volunteer Andrew Kuzhel.

The order has developed and manufactured the Volunteers from Ternopil and the money they collect citizens. This idea was supported by volunteers from other regions. In the near future “knights cross” expands its geography.

“This is a real Ukrainian. He went to the front and was there to not come here. To his children and the family lived here peacefully,” says co-organizer of the ceremony “the Knight’s cross Svetlana Koroleva.