Builders, farmers, manufacturers of toys: who defend Ukraine on the frontline for the current Cover 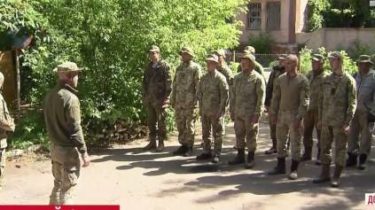 Ukraine honors its defenders – this festival began to celebrate in 2014 after the start of Russian aggression. And this is not the day of the military or national guardsman, and especially not a formal occasion men how it was in Soviet times February 23 – the day Ukraine commemorates the dead and celebrates the living people who deliberately came to her defense, and neither gender nor profession it does not matter, says the story TSN.19:30.

At the forefront now, the government and peace of its inhabitants to protect the people who left their profession and took up arms because he felt otherwise is simply impossible. Now they sometimes used the skills of civilian life to military life. So, fighters in the South of the Donetsk region to “zero” position built a bath. “Swimming under fire,” they say.

Bath did a small but real wood. It is made by hand directly on the front line and is designed to be not a fad but a real necessity for the defense of the country. “I’m a Builder. Residential homes, shopping centers, stores and factories,” recalls his occupation one of the soldiers who worked on the construction of baths. Now former Builder builds predominantly underground bunkers and obstacles for the occupier. “Now such a vital profession, I do not see, we need to protect the Homeland. And while we here will not turn out, I the machine will not fall,” he says.

Near a Builder is working agronomist and wondering what was missing, the residents of this region who have such fertile lands that they called them a war. “Sown alone pieces and mines,” the grieving over the fate of chernozems. His sister “Rocks” had worked at the plant for the manufacture of toys and had no idea that life forced to take up arms. “Various plastic sandbox buckets,” recalls their products the soldiers. Now all these people have one thing in common – the protection of Ukraine. “Of course, we already know how to fight, are fighting and will fight. Soldier his job always does. Soldier or officer, if the command is given, no matter how hard, will perform,” – said the fighters.

The distribution of personnel and personnel not already passed – now the Ukrainian army is the most battle-worthy, she has the experience and is ready to go forward. Each fighter can be called a hero – still quite young and very venerable men left the house, the job and came in cold trenches and under showers of enemy bullets to give back to the Motherland.