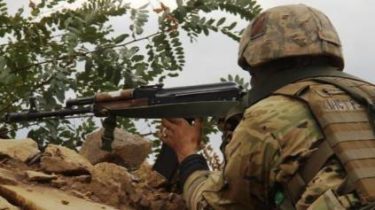 For Saturday, October 14, when Ukraine celebrates the Day of defender, the feast and the Day of Ukrainian Cossacks, in the area of ATO in the Donbas the militants have increased the number of attacks. They recorded 12.

“ATO forces 10 times with return fire forced the enemy to adhere to the regime of silence. The fighting casualties among our military aren’t present”, – said the press center of staff ATO.

In particular, in Mariupol direction from midnight fighters three times from heavy machine guns and small arms beat on the Ukrainian fortifications near Talakivka. The same gun that fired on the outskirts Gnutova. And Bazooka was used near Pavlopol.

At the direction of Lugansk under fire from grenade launchers twice hit positions of the Ukrainian army near Novoaleksandrovka and once near Popasnaya.

In the direction of Donetsk have recorded one attack: around 16:00 fighters from infantry weapons fired at Ukrainian troops near Avdiivka.