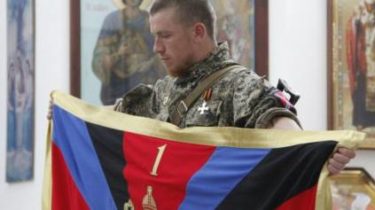 In the occupied districts of Donetsk region detained a group of people, suspected of organizing the assassination of militants, nicknamed “Motorola”. It is reported by Ukrainian Pravda with reference to the Internet resources of the invaders.

So, the information comes from the leader of the so-called “DNR” Alexander Zakharchenko, who nazava detainees “the Ukrainian group”. The leader of the terrorists said that not only detained one person suspected in the elimination of 16 October 2016 Arsen Pavlov, who died in the explosion in the Elevator at home in Donetsk.

As reported, the Russian writer and the henchman of fighters of “DNR” Zakhar Prilepin said that supposedly knows the names of the killers of the terrorist leaders Mikhail Tolstoy (“Givi”) and Arseniy Pavlov (“Motorola”). In eliminating terrorists, the Russians accused the Ukrainian saboteurs. One of them allegedly was a woman.

VideoSecurity “Motorola”: could the head of the militant to fake his own death