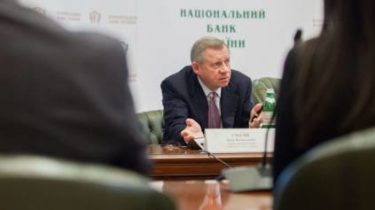 During September-October , the hryvnia lost ground in the currency market and the dollar in exchange offices has exceeded UAH 27. The national Bank explained the devaluation of the seasonal phenomenon and claim that the reason for the significant excitement there.

In an interview with “UKRINFORM” said the acting Chairman of the NBU Jacob Smoliy.

“In September and early October, in our view, the fluctuations were caused primarily defined by the seasonal factors. For example, in this period has not carried out exports of old crop and has not yet started exports of the new, but farmers are already purchasing fuel and lubricants for the future. In addition, the expectations which were announced in the summer that the exchange rate will rise, also worked as a psychological factor. However, we have no reason to say that the hryvnia sharply and considerably devalue, as the fundamental factors for its exchange rate is now favourable world prices for Ukrainian exports, particularly steel, are high, besides, will soon begin receiving the earnings from the new harvest,” – said resin.

He says that the Central Bank has “sufficient level of international reserves to 18.6 billion at the beginning of October, which is the highest since the beginning of 2014. These funds can be brought to mitigate significant fluctuations”.

In Ukraine, want to legalize the cryptocurrency and MPs already earn bitcoins for millions of dollars

Meanwhile, the government in its bill on state budget of Ukraine was founded at the end of 2018 technical dollar to 30.1 UAH. The current figure in the budget is 27.2-27,7 UAH per dollar.

“The Ministry of Finance uses these calculations to calculate the budget. In the National Bank market exchange rate, so we cannot say whether the rate of 30 or 27 hryvnia for one dollar. If you look at the real situation today and compare it with the projections contained in the budget for this year, they are clearly not true, because the real rate will be lower than projected. In other words, in order that he averaged for the year reached $ 27.8 million, now and until the end of the year we should have a daily rate of 30 hryvnia per dollar. Because, as we have seen, from April until the end of August, the hryvnia strengthened and maintained at a level of 25.5 and 26.5 per dollar. Consequently, the course that lays the government, predicting the budget is only the technical parameters for the calculation – to know where we are, if the ratio of the hryvnia and the dollar will reach this level. And in fact the course is formed by supply and demand and may not coincide with those predictions, which laid down the government,” – said resin.

This “reserve” in the projected course for that there is less risk for the budget.

“This is a “reserve”, for example, to estimate future expenditure on external debt in the hryvnia equivalent. For the government to lay naturally conservative forecast. However, do not take it to me for orientation,” – said the head of the NBU.

We will remind, the Ukrainian business expects that in the next year, the exchange rate will be at 27 to 30 UAH per dollar. This is evidenced by the survey among entrepreneurs, held by the NBU.