Repair for a few million coins, heels and cell phones break down escalators of the Kiev metro 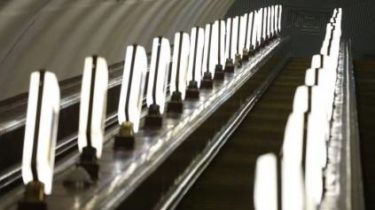 Almost every day workers of the Kiev metro escalators are under a penny, heels, mobile phones and even kitchen knives. People lose, and sometimes deliberately throw objects between the stages, according to a story TSN.19:30.

These “Museum pieces” at every station where there are escalators going at a few dozen. Each of them could cost the budget of the subway of several million hryvnia. “The penny just breaks. One fly, the second fly, breaks the third prong of the escalator,” – said the press-Secretary of Metropolitan Natalia Makogon.

Videmanette for a few million: the danger of the objects falling between the treads of the escalator

Now there is another overhaul of the escalator on the station “Khreschatyk”. For two months the engineers have to check all components and replace or send for repair broken. “The total cost of capital repairs of this particular escalator – about 6 million”, – said the head of the escalator service Mykola Soft.

His memory what the items did not stop mechanisms. “The most unusual – between the chassis and balustrade got a set of knives. Rode runner – and there is nothing left. Scrap”, – he said.

Only the capital has 122 escalator of the metro. If you connect them to each other, you can travel 22 kilometres – across all Kiev. Deep underground is the engine room, where the engines and other mechanisms that move the stage and the railing. A few years ago engines were replaced by less powerful to the escalators went a little slower. If the motor will burn up, passengers will not be waiting, because there is a spare.

Sometimes break not only engines, but also the railing – in the capital, there have already been cases when they just exploded and injured passengers. Experts attribute this to a defect of the manufacturer, which it is impossible to determine. A common myth that the railing go faster or slower steps to ensure that people are not asleep, master Alexander immediately debunks. “None of this specifically does not make,” he admits.

Metro line, a bridge and several streets in Kiev have published a list of the objects that you plan to rename

The system control of each escalator is a device for fixing the number of kilometers, braking distance, and the history of starts, stops and repairs. To repair the escalator almost 200 thousand kilometers – about 10 years.