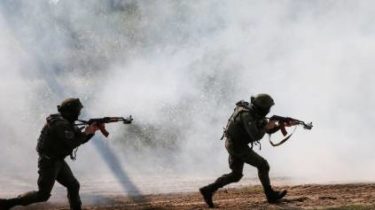 Practically no neutral ground between the positions of the military and Pro-Russian fighters in the Azov part of the Donetsk region. Fighters is connected to the so-called “bread peace”, says the story TSN.19:30.

The consequences could see journalists on the front lines – where every day the occupier conducts aim fire on the army, because he used a ban on the use of weapons in order to occupy the commanding heights and dig in on it. Now, out of positions of Ukrainian soldiers at the invaders – like the palm. Shoot the enemy day and night, why the military is constantly forced to be on the alert.

The military complain that the truce has not brought the promised silence, however, has significantly constrained their ability, but untied the hands of the enemy. The position of the enemy arose literally in two weeks the eyes of the soldiers of the APU, which had no right to counter. Now therefore, the parties share only 200 metres away, and the line advanced fortifications strangers became longer and stronger. However, in such difficult conditions tempered real masculine spirit. Men say they learned to fight back during the impact of attacks, and along their redoubts and wait patiently cherished team to go forward to clear the enemy from the Ukrainian land.

As reported, on September 17 in the area of ATO and further persisted the tendency to aggravation of the situation. Like several previous days in a row, the greatest activity of the opponent is recorded on Donetsk direction. Since the beginning of the day illegal armed groups 19 times violated the truce.