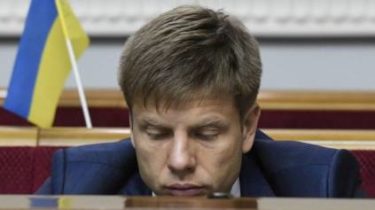 In the government quarter of Kiev near the building of Verkhovna Rada today, on October 17, the people’s Deputy from BPP Alexey Goncharenko left the egg.

Protesters demanded large-scale political reform – the creation of the anti-corruption court, the abolition of parliamentary immunity, the adoption of a new electoral law. They put makeshift gate, through which had to pass the people’s representatives. On one side was written “I’m a dick”, and with another – “I hear the people.” Goncharenko in the crowd at the gate broke the egg on the head. You pulled him from the ranks of law enforcement.

The protesters promised to block the outputs of the Verkhovna Rada, including underground

Earlier, unaffiliated MP Volodymyr Parasyuk today, October 17, at Parliament building staged a fight with the head of Department of State protection Valery Geletey. Between them there was a verbal altercation that escalated into staranno.