The protesters promised to block the outputs of the Verkhovna Rada, including underground 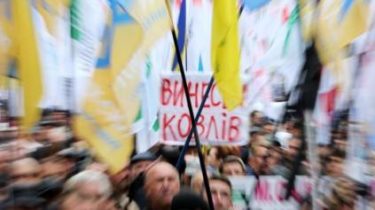 Participants in the “Big political reform”, which was developed under the Verkhovna Rada, have promised to block all the exits from Parliament, if up to 18 hours MPs will not vote for their requirements.

About it live on the page in Facebook declared deprived of the mandate of the former MP BPP Egor Firsov, who now represents the political power to “Alternative”.

Firsov said that he knew a network of passages in Parliament, so will block a total of 14 outlets – including underground and connected to other buildings.

Also, the protesters promise to remain under the walls of Parliament, while MPs will not make decisions concerning the abolition of immunity, the anti-corruption court and open lists.

We will remind, as of 13 hours the police counted 4.5 thousand participants at BP and another 1.5 – under NBU. The order is protected by 3,5 thousand militiamen. The adviser to the interior Minister Zoryan Shkiryak does not excludethat they can begin the provocation.