The police will not investigate the attack on Geletey, the head of the national police 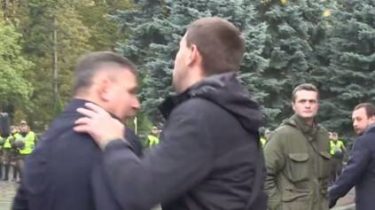 The attack of the people’s Deputy Vladimir parasiuk on chief Department of state protection Valery Geletey will not be investigated.

This was during the briefing, which took place on the night of 18 October, the head of the National police of Ukraine Sergey Knyazev.

We will remind, in the afternoon of 17 October, under the Parliament building in Kiev between Parasyuk and Geletey was a fight. Politician and official has a verbal argument, and the people’s choice went to the use of force – pushed Geletey and kicked.

Parasyuk said that he had not started the conflict first, and geleta allegedly defamed his honor. Head of ASB, in turn, called the behavior of the people’s choice inadequate and stated that the incident was initially provocation. Also geletey added that he addressed a statement to the police.