Minor provocations and insults the security forces: national police spoke about the situation at BP 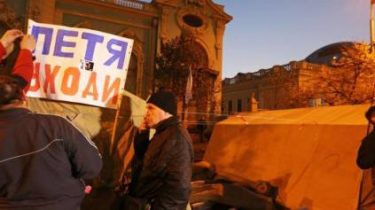 The situation in Central Kiev near the Parliament, where is the tent city protesters, calm, significant conflicts do not arise, now the detainees there.

This was stated by the chief of the National police of Ukraine in Kyiv Andriy kryschenko, writes “Interfax-Ukraine”.

“Conflict was not. There were a few skirmishes at checkpoints, where police conducts verification activities. Some try to travel without checking, so there are disputes. But significant clashes or problems there,” he said.

However, two days ago, when the campaign began, the police confiscated the protesters firearms.

“Now is not arrested. Yesterday was 11, but after drawing up of administrative reports all of them were released“, – he said.

But there are small provocations, for example, threats and offensive remarks about police officers and servicemen of National guard of Ukraine, as well as attempts to smuggle forbidden things.

“The police will respond only to actions that constitute a threat to the lives of residents and law enforcement,” he said.

Videopolice released the detained protesters near the Parliament

Krishchenko also said that despite talks with the protesters, they still have not returned the stolen property of the national guard (shields, helmets, etc.).

Measures for enhanced law enforcement will be stored until then, until there is a tent city and there are protests.

Organizers of meeting declare that their action was successful , and we encourage our supporters to continue it today, 19 October.