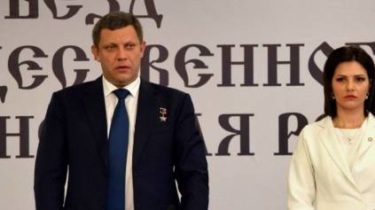 One of the leaders of “DNR” Denis Pushilin resigned as head of the “Central Executive Committee of the public movement “Donetsk Republic” – the main “party” invaders of the Eastern region of Ukraine.

About it declared today the leader of the terrorists Alexander Zakharchenko in the hotel complex “Shakhtar Plaza” during the Congress “party,” reports the advocacy website “DAN”.

He explained that the President “deals with more serious and important work” – the “people’s Council” (the so-called “Parliament” of terrorists), and talks in Minsk.

According to the report on the resource militants, “Pushilin will lead another important direction for the country – integration of the Donbas with the Russian Federation”.

Earlier it was reported that the Donbas between the leaders of the “DNR” and “LNR” all the more increase the contradictions due to the reduction of volumes of financing of the Russian Federation. According to the Ukrainian intelligence, the leader of Luhansk militants Igor Carpenter began collecting materials about the theft of the Russian financial revenues leadership, the so-called “DNR”.