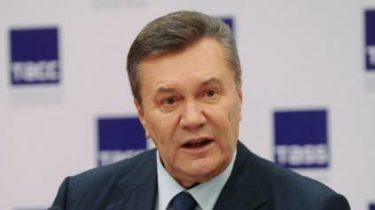 The Ministry of internal Affairs of Russia has allowed the Ukrainian Viktor Yanukovych to stay in Russia for another year the rights of political asylum. According to the publication Kommersant, the fugitive did not receive Russian citizenship and does not intend to do so in the future.

Russian media write that now the temporary residence of Yanukovych in Russia is limited to the 26th October 2018, but may be extended. As stated by the lawyer Vitaly Serdyuk, the reasons were “political persecution and threat of life in Ukraine”. The lawyer claims that Yanukovych plans to return to Ukraine when these causes disappear.

The court begins consideration of the case of the shooting of the protesters of Euromaidan. Among the suspects – Yanukovych

Earlier it was reported that the Prosecutor General’s office of Ukraine was summoned for questioning deprived the title of President Yanukovych. He is a suspect in the case of false imprisonment personal assistant to the late Metropolitan of Kiev and all Ukraine Vladimir – Alexander drabinko.