Participants of pickets in the occupied Crimea summoned for questioning 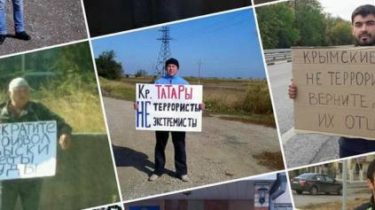 In anacoana Russia to the Crimea the police calls of the activists for interrogation to find out the names of the organizers of pickets 14 Oct.

This was announced on his page in Facebook the lawyer Emil Kurbedinov.

According to Curbedla, they started calling in the village Nizhnegorsky and urban-type settlement Lenino (Leninsky district of the Autonomous Republic of Crimea).

Interviews with those who were called in for questioning, posted in Facebook krymchanin Anvar Alimov.

The man in the video tells about the life of Crimean people. “Our people want to label the extremists,” he said.

Video settings Crimea, more than hundreds of people with banners took to the streets in protest against repression

“I know the guy that well – Renata Varlamov, who was kidnapped, tortured with electric shocks. That’s why I decided to come up with a poster. I have the right to Express their opinion this way,” he comments.

We will remind, on October 14 in anacoana Russia to the Crimea more than a hundred people with banners took to the streets in protest against repression. 49 protesters were detained.