Poroshenko told when plans to launch anti-corruption court in Ukraine 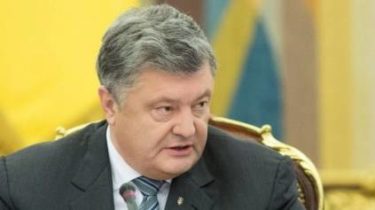 In the case of the adoption of the law on the anti-corruption court by the Verkhovna Rada President of Ukraine Petro Poroshenko is ready to sign it before the end of the year.

He stated this during a visit to the 10th mobile border detachment of state frontier service.

“I emphasize that the timetable for the establishment of the new court, as I imagine, and plan, provides for the adoption is final, the President’s signing of the Law “About anti-corruption Court” to the end of the year. This is absolutely real,” he said.

As noted Poroshenko, in a short time the Verkhovna Rada in the first reading will consider the new budget of Ukraine for the year 2018.

“The most curious of the journalists and financial analysts noticed that it was one very important article is the financing of the anti-corruption court, which was made at my insistence. What does it mean? This is an indicator that testifies to the commitment of the state leadership to launch next year, the work this radically new judicial body,” he explained.

However, Poroshenko added that the adoption of the law on the anti-corruption court was blocked in two parliamentary bills, after which the Parliament submitted to the Venice Commission and has already received its conclusions.

“Last year the Law “On judicial system and status of judges”, which were made by me, also appeared normal about the anti-corruption court. Now I insist and emphasize that with the participation of representatives of all factions immediately began work on a new project, which will take into account all the suggestions of Venice Commission”, – said the head of state.

Besides, he assured that he is ready to delegate its representatives to the working group that “in the past few weeks have presented an agreed bill.”

“If this is not done, I will have to take the initiative”, – concluded the President.

We will remind, Poroshenko called for an immediate establishment of anti-corruption judicial authority. “The urgent is the issue of establishing special anti-corruption court. This body should be formed on a competitive basis of the judges with an impeccable reputation,” he said. The President stressed that this body should be “dependent only on law, but free from any extraneous influences.”

The EU advocated the creation in Ukraine of an anti-corruption chamber of the court is separate. This was stated by the President of the European Commission Jean-Claude Juncker at the summit Ukraine-EU. “The EU demanded from Ukraine to create a specialized anti-corruption court. Now we have agreed that Ukraine established within the framework of its judicial system specialized chamber on this issue, it will be enough”, – said Juncker.

Earlier Prosecutor General of Ukraine Yuriy Lutsenko stated that he was against the creation of a special anti-corruption court. In the opinion of the attorney General, it would be easier to do because such a chamber will be established on the basis of the existing material base.