Around Excited partially unblocked traffic on the surrounding streets 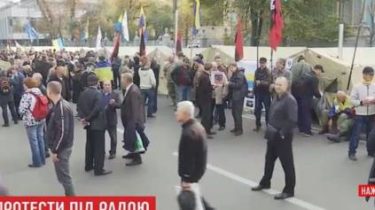 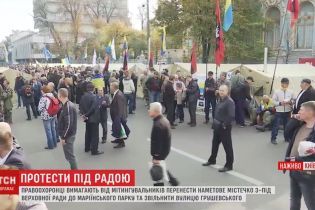 Police persuaded the protesters to move the tent city in Mariinsky Park and release the Hrushevskoho street to traffic, the correspondent of TSN.

The action by the Parliament has partially turned. “Self-help”, “Demalyansa”, movement “Honestly” and several other parties and organizations. They decided to influence the deputies of the different. Under the Parliament remain the only supporters of Saakashvili and Semenchenko.

The streets of the Garden and mulberry is already possible to drive, the police moved the cordons and liberated movement. At the same time, 20 tents remain on the roadway Grushevskogo.

Negotiations with police officers happen peacefully, but to remove the tents in Mariinsky Park protesters do not want. According to police estimates, about BP remain around 300 activists.

Mikheil Saakashvili, meanwhile, announced on 22 October the chamber under the Parliament, and calls on his supporters to gather again.

We will remind, on October 17, in Kiev representatives of different political parties protest outside the Verkhovna Rada for political reforms. The government quarter was blocked by police officers, between them and the demonstrators from time to time there were skirmishes. Protesters demand changes to election law, removal of parliamentary immunity and the creation of an anti-corruption court. On October 19, the Parliament did not accept all demands of the protesters, but in the ranks of the activists rifts – not all agreed to stay until the completion of the requirements, next time deputies will gather in the Assembly hall on 7 November.