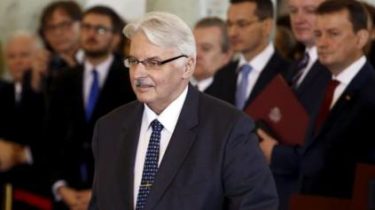 The Minister of foreign Affairs of Poland Witold Waszczykowski refused Hungarian counterpart péter Szijjártó in the joint signing of a letter of claims to the official Kiev regarding the new education act. It is reported by UNIAN referring to the Polish newspaper Rzeczpospolita and the Hungarian Heti Valasz.

According to Waszczykowski, the law is not the problem, through which Warsaw would announce the revision of the Association agreement between the European Union and Ukraine and to block further European integration intentions of Kiev. “I’m not going to condemn it because it is a bilateral matter between Hungary and Ukraine. However, I’m not going to politicize this issue, given the difficulties of Ukraine due to Russian aggression,” – said the foreign Minister of Poland.

The pole explained that Ukrainian law regulates the situation of Russian schools, and practically does not affect the Polish minority. “But I understand the situation for Hungarians: they live in the greater area and also more schools where Hungarian is the main language. But honestly, it sounds to me unnatural, because people who live in Ukraine, must understand both languages,” – said Waszczykowski.

Earlier it was reported, Ukraine and Hungary agreed in linguistic issuesrelated to the education act. This was announced by the Minister of education and science, Liliya Hrynevych. During a joint briefing with the Minister of foreign Affairs Paul Klimkin and the Minister of human resources of Hungary Zoltan Balogh by Grinevich noted that in the future model, which will learn in Hungarian schools will be established jointly with the Hungarian community. And all necessary adjustments will be made in a new revision of law curricula for their respective schools, new textbooks and methodological materials to train teachers.